Monday 2nd December saw Gordon & Rodger take the roles of Hans Solo & Commander Skywalker (respectively) as they led the Rebel Alliance in resistance against the agents of the Imperium on the ice-planet Hoth (led by Lord Vader himself - me).

The Rebels were a force left on-planet with a mission to disrupt Imperial activity and cause as much damage & destruction as possible. The Imperial troops were there to consolidate the capture of the world and search and destroy (mop-up) the remaining Rebel insurgent forces.

The scenario was the Hit & Run one from the Future War Commander (FWC) rules book - with each side having 2,000pts and there being two objectives on the table - a downed AT-AT (All Terrain-Armoured Transport) - the one that gets trashed in the film (The Empire Strikes Back); and also the captured Rebel ice-base. The Rebel mission was to blow-up one or both objectives.

The Imperial forces started with 2/3rds of their force (by points) off-table, with the two on-table HQ commanders choosing to split their forces 50/50 across both objectives and dig in. This meant 5 bases of Storm/Snow Troopers + 1 heavy tripod blaster team were dug in, on or around each objective (along with their commander) and each commander had a 'probot' recce droid and an AT-ST (All Terrain - Scout Walker) - or large chicken-walkers to you & I - patrolling outside the objective. This represented c.700pts. 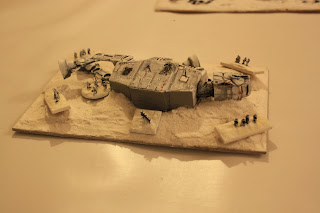 Aside from the objectives the terrain was classified as Poor Going - so everything was a hit on a D:5 - due to the harsh glare of the sun on the ice-fields, blowing snow storms, snow drifts and ridges and general freezing climatic conditions. This was scattered with a few large rocky outcrops (classified as impenetrable & blocking line of sight for all Low or Average profile troops) emerging from the snow & ice.

The Rebels deployed using hidden mobile hidden deployment - along one of the short edges of the table (nearest the downed AT-AT) - giving them the greatest move distance between them and any Imperial troops off-base on search & destroy sweeps (who'd have to come on on the opposite far table edge).

So the game commenced with the Rebel hidden troop markers converging upon the downed AT-AT - but very quickly the forward Imperial HQ Commander had thrown his 'Probot' recce into the middle of the various hidden move markers and the Rebel force was revealed to consist of c.6 tracked and armoured IFVs supported by 2 lighter fast armoured anti-armour platforms, a robotic recce drone and a large tracked ion-cannon (salvaged from the rebel base before it fell to the original Imperial assault). The IFVs were of course full of Rebel troops in snow gear supported by 2 large tri-pod blasters. 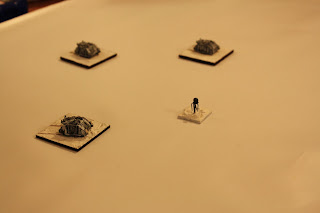 
Initially things did not go so well for the Rebels, as the dug-in Imperial Storm Troopers proved difficult to damage or root out of their defensive position around the downed AT-AT, but soon weight of fire proved significant and the lone AT-ST after dishing out a fair bit of damage was flanked & 'toasted' by the rebel light armoured anti-armour. 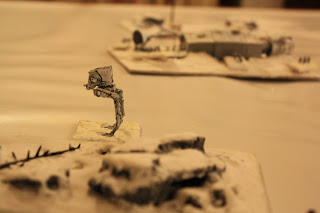 A lone AT-ST stalks the flank of the terrain, hunting for Rebels

Imperial tri-pod blasters laid down withering fire but to no avail and soon the Rebels were poised to launch an assault. But then the ground started to shake as the measured and deadly tread of an operational AT-AT shook the snow-field. 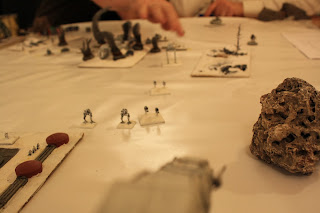 View from the arriving AT-AT, with 2 AT-RT recce walkers on the left, 2 jet-bikes screaming up the centre and the remaining right-flank AT-ST upfront near the downed AT-AT which is taking heavy fire!

It was Lord Vader returning from a patrol to the north in an AT-AT, supported by 2 x AT-RT (All Terrain Recon Transport) - lighter open cabbed walkers and 2 x fast Jet Bikes: representing a further 1300pts or so (ouch - that AT-AT at c.839pts is a beast & a half!).

Realising they could no longer delay their attack on the downed AT-AT the Rebel commanders called in an X-Wing fighter-bomber air strike on the dug-in Storm Troopers, supported by a drop-shop assault by Commander Solo in the Millenium Falcon - but concentrated AA fire from the dug-in Imperial HQ Commander and the working AT-AT (that 120cm ranged secondary AA weapon is worth the points!) hit some vital component on the Falcon and despite Chewy's roars (or was that Rodgers disgust) the Falcon veered off & aborted it's mission and the X-Wing swerved to deliver heavy friendly fire on the Rebel IFVs - OUCH! 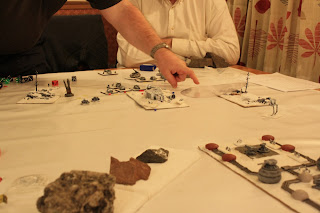 Commander Solo 'explaining' to Luke why the Millenium Falcon has veered off its drop zone target on the downed AT-AT (Luke is obviously not impressed!). The captured Rebel ice-base is bottom right.

Still the Imperial troops dug-in around the downed AT-AT hung on - but then there was a trembling in the Force (Lord Vader throwing a Command blunder - one of 3 he was to throw in the game) and his powers were reduced by 2 pips next round. 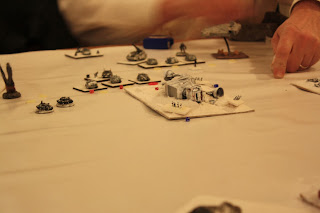 The Rebel IFVs take heavy friendly fire from the X-Wing attack (check-out those red casualty markers!). Luke is still not impressed with the behaviour of the Falcon!!

Still the Rebels pounded the downed AT-AT - but now the tracked Ion-cannon was within range and the Rebel infantry had de-bused from their IFVs, but the jet bikes and AT-RTs were advancing rapidly to aid the remaining AT-ST that was taking the fight to the rebels.

As the active AT-AT started its slow steady and measured tread across the ice-field towards the rebels the full weight of their attack fell like a hammer blow on the downed AT-AT and enough of a toe-hold was cleared for Rebel Engineers to lay charges and blow up the objective - but with their main infantry team only just making it out of the blast zone suppressed. 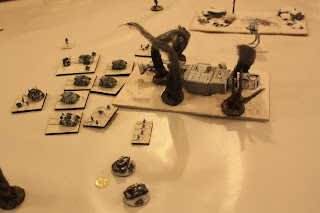 Rebel infantry de-bus and the engineers get to work. Most of the Storm troopers have been destroyed. Now's your chance boys!

Now was the Imperialists opportunity - Lord Vader rallied his powers (and threw a double 1 on command) and the AT-AT advanced - all guns blazing in support of a wall of screaming jet-bikes and walkers. But despite throwing a mass of 12 attack dice at some of the rebels the damage was minimal and as the Rebels ran for cover they managed to trash 3 Imperial walkers and a jet bike with concentrated fire.

Once again the Millenium Falcon tried an aerial assault only to shy off and land a way off its objective (the old Rebel base now in Imperialist hands), more roars from Chewy and curses from Hans!

At this point the Imperial luck ran out again Lord Vader was troubled by young Skywalker and blundered, but this time causing the mobile AT-At to advance on the enemy. This brought it into range of massed & concentrated rebel ground fire - with all the remaining IFVs, the ion-cannon, the rebel infantry and the heavy tripod blasters now pumping blaster fire into it (so that will be 3 moves of 19 dice!) the AT-ATs shields finally failed and it was suppressed (on a +4 - we were playing original straight rules not the new 6 for suppression on massives rule).

Even with Lord Vader's influence - he had now disembarked from the AT-AT and moved into the old rebel base, the AT-AT could only manage some minor damage on the Rebel ion-cannon, but the remaining jet-bike started to do the business - taking out the 2 light anti-armour vehicles in two moves of close range flank fire. But alas for the Imperium, Lord Vader failed his command role and the Rebels too up shooting the beleaguered AT-AT - another 3 rounds of 19 dice shooting and finally a stray blaster shot ricocheted off an armoured bulk-head and cut through a power-cable and the AT-AT engine spluttered to a stand-still. So with smoke pouring from its hatches (those electrical fires look a lot worse than they seem) the AT-AT crew baled for cover. 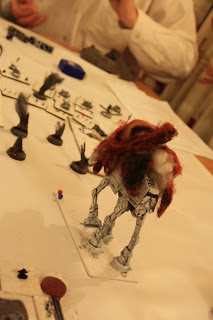 The AT-AT finally surcomes to massed Rebel shooting - but it did take nearly 50 dice rolls!

Despite only being at 12 breakpoints out of 15 but with a blizzard blowing in over the ice-field and the light failing the Imperial forces called it a day and retreated to the safety of the old Rebel base, whilst the Rebels, jubilant over their achievements, evaporated into the gathering gale & white-out. The game lasted 7 out of its 12 turns - with the Rebels getting down to (& achieving) single digit command rolls on a number of occasions which made this a very hard-fought game.

Great game - I'll publish the Imperial list on the FWC site - along with a few photos (not many as it was a very tense and engaging game). The Rebel list was based on the FWC Colonial Union list and worked very well. The Imperial forces were a combination of Red Guard and Space Marines.

The AT-AT is a real beasty - the rebels by concentrating their fire and destroying the AT-ST and AT-RT walkers and jet-bike support, left the AT-AT open to having its shields taken down and then being suppressed and that was its doom. However, as it could be hit on a +4 and therefore suppressed on a +4 it was easy meat once Rodger & Gordon got enough fire-power to bear. Maybe suppression on a D:6 might be worth a try next time boys ;-)

Gordons' Rebels looked very good (infantry care of a 0.99p pack of Cold War Soviet parachute infantry purchased as the last Berkeley HoTT event) and did the business - and not a smart missile or any real 'hi-tech' gear in sight (other than the ion-cannon - which was very appropriate and the HVP on the AT-AT primary weapon - for what good that did it!).

I think another game is in order - I just need to get the other two active AT-ATs built & painted - along with a few more Imperial Snow/Storm troopers, but also I need to get the Rebel Snow-speeders off the ramps as well, along with the Taun-Taun recce ... but time is with us, as is The Force!

Aetius Last of the Romans